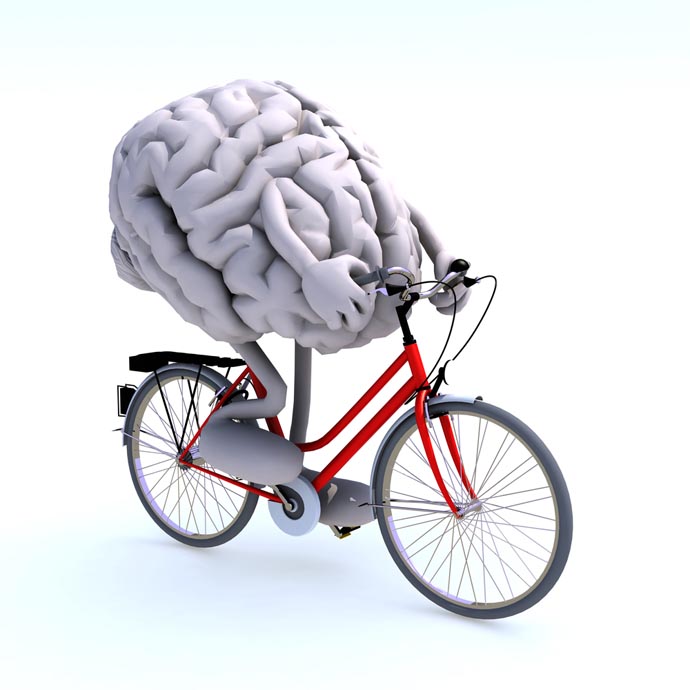 Your Brain on Bicycling

It's no secret that cycling makes you fitter. It also sharpens your thinking and melts away stress. Now researchers are discovering why—and exactly how you can maximize the cognitive benefits of a good ride.

Every morning Canadian neuroscientist Brian Christie, PhD, gives his brain an extra boost. We're not talking about tossing back multiple strong shots of espresso or playing one of those mind-training games advertised all over Facebook.

"I hop on my bike, go to the gym for 45 minutes, then ride the rest of the way to work," says Christie. "When I get to my desk, my brain is at peak activity for a few hours." After his mental focus sputters to a halt later in the day, he jump-starts it with another short spin to run errands.

Ride, work, ride, repeat. It's a scientifically proven system. In a recent study in the Journal of Clinical and Diagnostic Research, scientists found that people scored higher on tests of memory, reasoning, and planning after 30 minutes of spinning on a stationary bike than they did before they rode. They also completed the tests faster after pedaling.

Grow Your Mind
Exercise is like fertilizer for your brain. All those hours spent turning your cranks create rich capillary beds not only in your quads and glutes, but also in your gray matter. More blood vessels in your brain and muscles mean more oxygen and nutrients to help them work, says Christie.

When you pedal, you also force more nerve cells to fire. As these neurons light up, they intensify the creation of proteins like brain-derived neurotrophic factor (BDNF) and a compound called noggin (yes, really), which promote the formation of new brain cells. The result: You double or triple the production of neurons—literally building your brain, says Christie. You also release neurotransmitters (the messengers between your brain cells) so all those cells, new and old, can communicate with each other for better, faster functioning.

This kind of growth is especially important with each passing birthday, because as we age, our brains shrink and those connections weaken. Exercise restores and protects the organ, says Arthur Kramer, PhD, a neuroscientist at the University of Illinois at Urbana-Champaign. "Our research finds that after only three months, people who exercised had the brain volume of those three years younger," says Kramer, referring to a study that examined the brains of 59 sedentary volunteers between the ages of 60 and 79 who either did an exercise program or were inactive for six months.

Ride Your Way Smarter
So if a little exercise boosts your mental acumen, will going longer and harder earn you Mensa membership? Not so much, says Christie. More isn't always better, especially in the short term, he says. The same study that reported brain benefits from a short exercise session also revealed that more intense efforts can temporarily compromise memory and information processing, something Christie has seen firsthand.

It's clear that physical activity like cycling boosts production of feel-good chemicals such as serotonin and dopamine.

Christie's teenage daughter also kicks off her day with exercise—specifically rowing practice, usually with searing interval sets. But instead of leaving her brain firing on all cylinders, the workout leaves her a little stalled out when she arrives at school. "Short term, you're on a U-shaped curve for exercise and mental benefits," says Christie. "Too little and your brain doesn't get what it needs to work optimally. Too much and your body has sapped the glucose and other resources it needs, so it's hindered until it recovers." The sweet spot for sharp mental acuity right after exercise is about 30 to 60 minutes of aerobic riding at roughly 75 percent of your maximum heart rate, or an effort of 7 on a scale of 1 (standing still) to 10 (going all out).

Positive Spin
Of course, there's a lot more to mental fitness than just improving your smarts. Plenty of science backs the idea that a good ride can also have emotional benefits. Cycling can elevate your mood, relieve anxiety, increase stress resistance, and even banish the blues.

"Exercise works as well as psychotherapy and antidepressants in the treatment of depression, maybe better," says James Blumenthal, PhD, professor of behavioral medicine in the department of psychiatry and behavioral sciences at Duke University in Durham, North Carolina. A recent study analyzing 26 years of research finds that even just some exercise—as little as 20 to 30 minutes a day—can prevent depression over the long term.

At the moment, scientists don't completely understand the exact mechanisms, but they do know that physical activity like cycling boosts the production of feel-good chemicals such as serotonin and dopamine. "As soon as our lab rats start running on their wheels, they get a 100 to 200 percent increase in serotonin levels," says J. David Glass, PhD, a brain-chemistry researcher at Kent State University in Kent, Ohio.

As you pedal past the 20-to 30-minute mark, other mood-lifting chemicals like endorphins and cannabinoids (which, as the name suggests, are in the same family of chemicals that give pot smokers their high) kick in. When researchers asked 24 men to either run or pedal at a moderate intensity or sit for about 50 minutes, they found high blood levels of anandamide, a natural cannabinoid, in the exercisers, but not in sedentary volunteers.

Even better, regularly riding your bike helps keep hormones like adrenaline and cortisol in check, which means you'll feel less stressed and you'll bounce back from anxiety-filled situations more easily.

The sweet spot for sharpening mental acuity right after exercise is about 30 to 60 minutes of aerobic riding at roughly 75 percent of your maximum heart rate.

Remember: Although it's healthy, exercise itself is a stress, especially when you're just getting started or back into riding. When you first begin to exert yourself, your body releases cortisol to raise your heart rate, blood pressure, and blood glucose levels, says Monika Fleshner, PhD, a professor of integrative physiology at the University of Colorado at Boulder. As you get fitter, it takes a longer, harder ride to trigger that same response. "For people who are active, it takes a greater crisis to trigger the cortisol response as compared with sedentary people," says Fleshner. "So now you can go into a stressful environment and be okay. You can endure a lot more before you kick off a stress response."

What's the cycling prescription for happiness? The authors of a recent review study on exercise and depression came up with the following guidelines to ward off the blues with aerobic exercise: Do three to five sessions a week. Each session should be 45 to 60 minutes long and keep your heart rate between 50 and 85 percent of your max. Of course, that's just a minimum recommendation aimed at the general public. You can go ahead and ride to your heart's—and mind's—content.